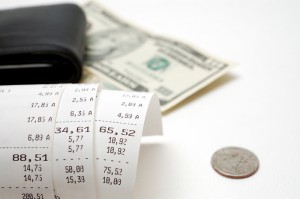 People are exposed to the chemical bisphenol A (BPA) mainly through foods and beverages, especially those in cans. But BPA, a potentially harmful chemical, is also found on receipts, and new research shows the substance can indeed be absorbed into people’s bodies through the skin when they handle receipt paper.

In a new study, participants who handled receipts continuously for two hours showed an increase in BPA levels in their urine.

BPA, which is used in some plastics, the lining of cans, and other food packaging, is believed to have hormone-disrupting properties and has been linked to various health problems, ranging from obesity in teenagers to reproductive problems in adults. BPA is also used in thermal receipt paper as a color developer, and is found in other paper products, too.

Participants in the new study had, on average, a urinary BPA concentration of about 2 micrograms per liter at the beginning of the study, similar to the average level seen in the U.S. population.

After handling receipts for two hours with bare hands, the average BPA level in the participants’ urine increased to about 6 micrograms per liter. For comparison, the levels after eating a can of soup are about 20 micrograms per liter, according to the study published today (Feb. 25) in the journal JAMA.

The health implications of this type of exposure to BPA are not known, and larger studies are needed to confirm the results, the researchers said. But the findings may be relevant to people whose jobs involve touching receipts, for example cashiers, who handle receipts for 40 or more hours weekly, the researchers said.

The findings should not overly concern general consumers, who handle ATM or supermarket receipts for brief moments, said Heather Patisaul, an assistant professor of biology at North Carolina State University, who was not involved with the study.

It doesn’t look like the cash register receipts are going to be a big exposure problem for the average person,” Patisaul said. “I think people should just have an awareness that this is another possible route of exposure.”

Up until now, the focus has been on oral exposure from foods,” Patisaul said. The new study shows that “sources of BPA other than food are something we should consider when thinking about how people are exposed to BPA and other chemicals in their daily lives,” she said.

In the study, the researchers didn’t find a significant increase in BPA levels when participants wore gloves while handling receipts, suggesting that gloves could be a solution for those who often handle receipts and wish to reduce their exposure.

If people are trying to limit their exposure, I think the best thing that they can do is wash their hands when they’re done handling the receipts, or not take the receipt,” Patisaul said. from livescience